The Queen of England is the queen of United Kingdom, Canada, Australia, and New Zealand. She first appeared in "The Smell of Vengeance". She is a member of the League of Nations.

In "The Smell of Vengeance", she sat with the League of Nations and bantered with them over how to deal with Hector Con Carne's Stink Ray attack. She provided no useful information.

She was mentioned, but not seen in "Gutless", when Hector attempted to fire an attack on Buckingham Palace, but chickened out, not having Stomach to provide his courage.

In "Hector, King of the Britons", Hector wielded the Sword of Excalibur, giving him ultimate political power over all of Great Britain. He rushed to Buckingham Palace to claim his dominance, but The Queen of England, along with the former King of England, while sipping tea together, explained to him how despite being heads of the government, they don't "rule" the way they used to, being more level-headed now.

In Season 1, The Queen of England was a short, fat, dark-skinned woman with a curly beehive hairdo. She had golden loop earrings and a purple dress shirt with yellow arm fringe.

In Season 2, She underwent a drastic transformation, now being a thin, light-skinned woman of an average height. She now had wavy, ear-length brown hair and donned a light blue cap and down along with a white pearl necklace and white earrings. She had a big nose and misshapen teeth, mocking that of a British person's appearance.

The Queen of England is a properly poised fancy lady, who despite her wealth and superiority, treats her citizens with kindness, and even equality. 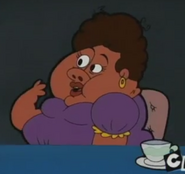 The Queen of England's Season 1 Appearance.
Add a photo to this gallery
Retrieved from "https://evilconcarne.fandom.com/wiki/Queen_of_England?oldid=8760"
Community content is available under CC-BY-SA unless otherwise noted.