The Grim Reaper or Grim is from The Grim Adventures of Billy & Mandy but still made some cameos in this show. He is the grim reaper and Billy and Mandy have him as their friend/slave. He talks in a Jamaican accent, and was voiced by Greg Eagles.

In "Everyone Loves Uncle Bob", a stuffed doll resembling him was thrown at the stage, by an audience of impatient kids. It should be noted that Billy and Mandy also made cameos, as two impatient kids in said audience.

In "Boskov's Day Out", General Skarr had a watch with Grim's face depicted on it.

In "Ultimate Evil", Major Dr. Ghastly explained how all their previous plans have led to disastrous results, while she projected an image of Grim's face on a hologram.

In "Gridlocked and Loaded", General Skarr had a bobblehead of Grim in the Con Carne Car.

In "Company Halt", Grim made his first actual appearance, in Evil Con Carne's crossover with The Grim Adventures of Billy and Mandy.

He is a skeleton in a black robe. He has a long wide chin.

He hates being stuck with Billy and Mandy, and longs to be free, but he has shown that the kids have grown on him some. 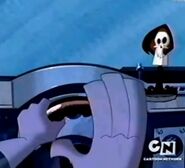 For more information about The Grim Reaper, visit his page on The Grim Adventures of Billy and Mandy Wiki.

Retrieved from "https://evilconcarne.fandom.com/wiki/Grim?oldid=8823"
Community content is available under CC-BY-SA unless otherwise noted.