General Reginald Peter Skarr is an army general who works for Hector. He also played as a character in the show The Grim Adventures of Billy and Mandy as Billy's next door neighbor. In Evil Con Carne, he is given the title of General, is considered "Apprentice Evil Supreme Commander", and is in charge of leading the soldiers into battle. However, his battle strategies and ideas for world domination are often ignored, and he is often given petty tasks such as bringing Hector snacks. He is voiced by Armin Shimerman.

He has a blind eye where his red lightning bolt shaped scar is. He has a dark blue hat and a dark blue uniform and black boots. He is bald and wears an oddly shaped hat. He has a noticeable unibrow, as confirmed in Gridlocked and Loaded. In an extreme close-up in Day of the Dreadbots, it's revealed that he has blue eyes. He is again shown to have blue eyes in Boskov's Day Out while being strangled by Vladimir.

He is usually depicted as being unusually pale in some episodes, while in others his skin is a more realistic tone.

In season two, his hat is more stylized, having a sharper curve and sharper corners. His teeth are also slightly yellow, and his hands are more realistically sized. His nose and head are not quite as long, but his nose sticks out more, and his head is more round. His boots are more triangular in appearance. This appearance is carried over into The Grim Adventures of Billy & Mandy.

He also appears to be only slightly shorter than the average person in The Grim Adventures of Billy & Mandy, but is still shorter than Ghastly in Company Halt, suggesting Ghastly may simply be a tall character.

However, he is still taller than Estroy, many of the henchmen who work for Hector, and children.

General Skarr is obviously bald, but on the rare occasions where he is shown to have hair, it is often different colors. In "Tiptoe Through the Tulips", he is shown shaving orange back-hair.

However, in "Devolver", his hair was implied to be black, when he transformed into a gorilla.

Certain Grim Adventues, episodes such as "Heartburn" and "Skarred for Life" showed him with black hair. In the "Underfist" special, he grew a mustache and a goatee, which are now gray, but this is most likely due to his old age.

In the Underfist special, his appearance changed once more, with him now sporting a drearily gray mustache and goatee, as well as the trademark Underfist uniform, that being a blue jumpsuit with a black collar and the Underfist logo on the front. He also wore black gloves, pants, and boots. For him, specifically, his uniform came complete with a color-coded beret. Also, his scar is more diagonal.

He oftentimes tries to overthrow Hector Con Carne, as he believes he is more fit to rule the world, and is sick of being Hector's lackey. He often fantasizes about either controlling or doing away with Hector and his other co-workers, and has often come very close to doing so.

General Skarr is often shown to be be harsher, crueler, and oftentimes far more evil than his boss Hector Con Carne. In the intro of the show, it is said he enjoys interrogation, presumably through torture of the interrogated victims.

He also occasionally is a smart alec, as when Hector asked how to prevent the commandos from kicking their butts, Skarr suggested they "Cover (their butts) with (their) hands, sir." and showed a light grin after saying so. He also has, in a couple of episodes, poked fun at Hector not having a body.

He can be bitter and cruel towards animals, and has been known to kill a dog to feed the other five dogs (and use what happened to that dog as a threat to get the dogs to move faster), and treated Bozkov badly when told to train him. Despite his cruelty to these animals, he has shown a fondness towards pigeons and feeding them in the show. He also at one point secretly showed affection towards what he believed to be a dalmation puppy.

Out of all the characters in the show, he has the worst possible luck, and he knows it. He is sick of his efforts going unappreciated, another reason he tries to overthrow Hector occasionally. In The Mother of all Evils, he briefly reveals that he is lonely, and states that the loneliness is the only thing worse than the others not appreciating him enough; however, this and Trouble with Skarrina are the only episodes where he shows signs of loneliness.

In Trouble with Skarrina, it is said by Estroy that he is the dumbest member of Evil Con Carne; however, this is not evident in most other episodes, and his own personal ideas for how to take over the world are usually very sound. Thus it is possible his actions in that episode was the result of desperation and his usual bad luck, rather than stupidity.

In The Grim Adventures of Billy and Mandy, he tries to avoid his old evil ways and has become an avid gardener. Despite this, it is clear he still wants to rule the world himself. 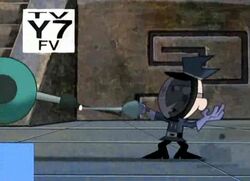 He shows great skill in surfing, fencing, and strategical knowledge. It is also implied that he is good at concealing his ill intentions, as he was never caught betraying Hector.

The Grim Adventures of Billy and MandyEdit

He is an avid and skilled gardener, but is also seen using various robotic equipment, and practicing some sword skills. He also temporarily had control over plants.

He once again is shown skilled with robotic equipment, but once the equipment is destroyed, he then shows great skill in melee combat using one of his gardening rakes. He also is shown to be an effective double agent.

General Skarr is fairly clumsy, often falling into hazardous situations. He also is shown to have horrendous luck, as the worst things in the series tend to happen to him.

Retrieved from "https://evilconcarne.fandom.com/wiki/General_Skarr?oldid=9296"
Community content is available under CC-BY-SA unless otherwise noted.