General Skarr has just finished tending to the pansies in his garden, when he smells the recognizable stench of feces, which he assumes came from a dog, before being Billy come out of the garden, claiming to have pitched a loaf, followed by Harold, saying the same thing. Skarr kicks down the door to his house and screams in fury, cursing Billy for his consistently repeated destruction of his garden. Skarr realizes he's so angry he's shaking and tries listening to gothic music, in an attempt to calm down.

Just then, his already meager tranquility is disrupted by an underground drill vehicle breaks through the floor of his house. Out steps Major Dr. Ghastly and Hector Con Carne, who both explain to them their plans of reassembling Evil Con Carne, and making one last attempt to take over the world. Skarr is not on board with the idea, being inimical toward them for even being in his house. However, Hector learns about Billy, due to witnessing his multiple visits to his house, including one from Skarr's Mother, he assures Skarr that by joining, he'd also get the privileged of putting an end to Billy, which convinces Skarr to comply with the reconstruction of Evil Con Carne, which means they'd be taking his money and setting up shop in his house.

Throughout their run, General Skarr hammers on the bathroom door, demanding for Ghastly to quit applying makeup and get out. Just as she does, Hector rushes into the bathroom and slams the door behind him. If that wasn't enough to aggravate Skarr, Hector comes out, wearing a gas mask, while a cloud of stink flows out of the bathroom behind him, urging Skarr to stay out of the bathroom for a few days in the same fashion as Harold did, after taking a dump in his garden. Later, when the gang is watching TV, Hector flips through channels and Skarr sees a gardening program. His request to watch that is denied, as Hector explains the rules of being territoriality proclaimed as the "king of the remote", for being the first one to use it. Hector then pesters Skarr by going back and forth from the gardening program to other programs, just to drive him crazy. Skarr then destroys the TV with a giant death ray in anger, which ends up affecting himself more than Hector.

General Skarr vents to his garden gnome about Hector and Ghastly, before finding out the gnome is just Billy in disguise, to which he reacts to by proceeding to chase him around his yard with a driving lawnmower. Back at Billy's house, Mandy inquires from Grim, where Billy is and Grim gives her the answer, accompanied by his suspicions of something rather ominous currently going down at said location. Mandy agrees, and calls attention to the crazed looks Skarr usually gives her.

At long last, Hector and Ghastly introduce their invention, which at first, appears to be a measly rubber band. Skarr raves at them for wasting his money on something that seems so harmless, until he's shut up by Ghastly snapping him with it. Hector then reveals they've built gigantic Rubber Band Tanks, which they'd use to maximize that same pain upon the citizens of Endsville and later, the people of the world, winning back Skarr's respect.

Grim and the kids' football game is interrupted by earth shattering approach of the rubber band tanks. Skarr announces to his neighborhood that this is the day he takes over, as Hector unleashes the rubber bands onto everyone else. The neighborhood runs around in fear, while it's people their belongings get destroyed. Grim tries stopping the attacks with his scythe, but throws in the towel, the instant it's snapped from his grasp, by a rubber band. Billy sees the situation as hopeless, until Mandy instructs him to go to Skarr's garden. Billy dances around in Skarr's garden, leading Hector to fire a rubber band at that location, destroying the garden and missing Billy. General Skarr snaps at Hector for runining his garden and commits mutiny on him. Skarr attacks Hector from above and by throwing him back off, Skarr crashes into the giant thumbs of one of the tanks, which then tips over and crushes Hector. Ghastly and Hector's Henchmen take advantage of Hector's supposed death and they abandon him, putting an end to Evil Con Carne at last.

After the chaos ends, General Skarr informs Grim and Mandy that he no longer seeks world domination, caring more about his garden than anything, which is soon destroyed once more by Billy eating his prized roses. The episode ends with Skarr once again, chasing Billy around the garden with his driving lawnmower. 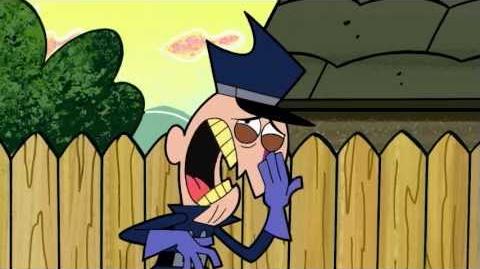 The Grim Adventures of Billy & Mandy - Company Halt (Preview)
Add a photo to this gallery
Retrieved from "https://evilconcarne.fandom.com/wiki/Company_Halt?oldid=8720"
Community content is available under CC-BY-SA unless otherwise noted.