Start a Wiki
The Cement Brick Gun is a weapon used by Cod Commando in Jealousy, Jealous Do in the beginning while attacking Bunny Island.

It functions as a gun that shoots cement blocks which can be used both offensively by firing the bricks at enemies, and to build structures and walls. 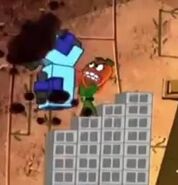 Cod using one of the guns to build stairs for him to climb down during the battle, while firing the other at enemies
Add a photo to this gallery
Retrieved from "https://evilconcarne.fandom.com/wiki/Cement_Brick_Gun?oldid=6629"
Community content is available under CC-BY-SA unless otherwise noted.